The New York Knicks made the news in the summer of 2012 when the basketball club signed added renowned NBA veteran Jason Kidd and ex-Knicks Raymond Felton, Kurt Thomas, and Marcus Camby. They also made some noise when they successfully lured Rasheed Wallace out of retirement after spending the previous two years away from the league. In addition, they also signed overseas sensations in James White and Pablo Prigioni.

Heading into the season opener, the Knicks were the oldest team ever assembled in the league history, with average age of 31.3 years old and an average pro experience of 10.1 years. In 2012-2013, the league average age was 26.7 years old. The table below shows the 2012-13 roster. The roster contains key players. Three players were excluded from the list (Quentin Richardson, Earl Barron, and Soloman Jones), as the three of them played a combined four games in the regular season. Kenyon Martin’s age, experience, and salary are not included in the table because he was added in mid-season and was not part of the roster at the start of the 2012-13 season.

The Knicks were 54-18 and advanced to the second round of the playoff for the first time since 2000. Some of the facts we can draw based on the table:

4) Inexpensive role players, excluding Anthony, Chandler, and Stoudemire’s salaries, and including Martin’s, the Knicks spent a total of  $25.16 million on 13 players, paying an average of $2.10 million on each player.

The NBA (and the rest of the sport league and the business world) is all about exploiting market inefficiency. And this explains the rapid growth of analytics. Businesses use analytics to make the best decisions while sport teams use analytics to win games. For another words, in sport, teams often exploit the market inefficiency by making an unconventional approach that can lead to winning. The Knicks gambled and have demonstrated this in 2012-13 and shown the rest of the league that their approach worked! Instead of filling the roster with young, athletic players, or signing decent role players, the Knicks filled their roster spots with NBA veterans by signing  them mostly to the veteran minimum contracts. In what was perceived to be a headscratcing move turned out to be the winning formula for the Knicks that season. Using what then-head coach Mike Woodson called “the veteranship,” the Knicks outsmarted and outplayed their opponents. The experiment worked and years of experience paid off as the Knicks were able to finish games by inserting Thomas and sometimes Camby to the lineups and played other veterans short spurts of minutes throughout the game to keep them refreshed each time they checked in. However, this change in roster came with a deep cost. The Knicks were awfully inconsistent throughout the season. The Knicks opened the season by winning six games in a row and finished the month of November with 11-4 record. They performed well in December as they had a five-game winning streak and a four-game winning streak in that month. Then, the Knicks struggled in January, alternating between wins and losses. This is followed by an encouraging five-game winning streak from January 27 to February 4. And then again, the Knicks struggled and had two separate four-game losing streaks–one in February and another one in March–before finishing the season 16-2, thanks to a 13-game winning streak. For the complete game-by-game result, please click here.

The struggle can largely be attributed to injuries induced by old age and the grind of the season. 82 games is a long season and many of the veterans simply didn’t have enough health and stamina to finish the season from start to finish. Veterans Kurt Thomas and Rasheed Wallace had season-ending injuries that ended their careers. Marcus Camby was inconsistent with games played and Jason Kidd simply ran out of gas in the playoffs, missing the last 17 shot attempts in his final 10 games. Moreover, speaking of running out of gas, the Knicks generally performed well in the season and only had two games that led to overtimes–and the Knicks lost both games in overtimes–another evidence that an old roster is not suited to play extended minutes in an NBA season.

For the purpose of statistical approach, displayed below is the Knicks’ performance in the 2012-13 season. Please note the league ranking in several categories. 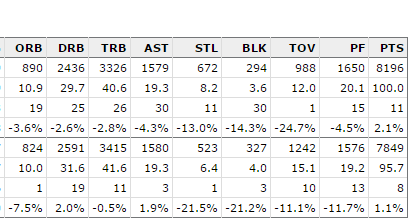 The results are mixed. Interestingly, in many categories, the Knicks are either leading the league or trailing at the bottom. Take shooting for example, the Knicks shot well. The Knicks were leading the league in both three point attempt, three point made and ranked fifth in three point made percentage. However, the Knicks ranked dead last in both two point attempt and two point made. The Knicks shot two point field goals well, ranking 11th in the league. This shows the veterans are efficient at their shot selections and can also imply to their smart use of shot clock and not taking too many forced or highly contested shots. On the other hand, the Knicks’ opponents lead the league with their two point attempt and ranked 25th in three point attempt. In addition, the opponents shot 35.7% (15th) from beyond the arc and 48.7% (23rd) from the two point territory. This shows the veterans were playing smart defense by forcing the the opponents to take difficult two point field goals while limiting their perimeter shooters, hence explaining the low numbers. However, allowing the opponents to take a league leading 55.8 field goals per game and making 27.8 (ranked 3rd) of these attempts also implies the aging and injured big men rotation. The Knicks’ health issue is also reflected on the rebounds. The Knicks ranked 26th in total rebounds while allowing the opponents to grab league leading 10.0 offensive rebounds per game. The aging and often-injured big men rotation posed a serious interior defense and rebounding issues which may also explains that opponents were taking advantage by constantly attacking the rim, thus intentionally shifting their offense from three pointers to beneath the basket.

Furthermore, the number of blocks also tells the story. The unhealthy Knicks front court ranked last in shots blocked at 3.6 per game while the opponents ranked third by blocking an average of 4.0 Knicks’ own shot attempts. This stats show the diminished athleticism in the veterans, rendering the front court to be ineffective in rim protection as well as being able to finish strong underneath the basket.

Despite the injuries the inconsistency displayed throughout the season, this experienced Knicks team was still able to find a way to finish strong nights in and nights out and posted the best record since 2000. This success was not a fluke. The Knicks have proven that experience and years of basketball are enough to outlast faster and younger opponents; however, time is never your friend, and in spite of all the experience under the veterans’ belt, the grit and grind of the season was just too much as the veterans ultimately succumbed to Father Time. Speaking of time, it also reveals a serious continuity issue as the Knicks had a major roster shake up after that season as the Knicks found it impractical to keep an aging roster together for the long haul. The following season, 2013-14, the Knicks only kept two returning veteran role players in Kenyon Martin and Pablo Prigioni while filling the roster with young players such as Tour’e Murray, Cole Aldrich, and Tim Hardaway, Jr., pushing the average age from 31.27 to 28.20 years old. Great teams that can contend for deep playoff runs don’t usually have major roster shake up every year because this gives instability to the team’s depth and manpower. It is simply too much and impractical to look for veteran players every offseason while maintaining that same competitiveness from the previous year.

Conclusively, the Knicks’ bold move and unconventional approach to the game of basketball by exploiting market inefficiency and signing veterans have proven that having a team composed of savvy and experienced players is enough to win games, but not a season–and certainly not seasons (plural!). And this is evident by the Knicks’ lack of healthy bodies and stamina to be able to contend consistently throughout the regular season and the playoffs. As a result, the 2012-13 Knicks team is a good lesson that building an old team is only enough for short term goal and is definitely not a formula for sustained success through multiple seasons.

The Knicks experiment in investing on “veteranship” is a first in the NBA, and it will also likely be the last as the rest of the league, who were unwilling to invest on old rosters, have seen the outcome and the sad ending to a roller coaster Knicks season that was filled with some defiant wins and surprises.

(all graphs are created by me, and all sources of information are courtesy of NBA.com and BasketballReference.com as of December 13, 2016)

An economic approach: More referees in NBA games? »
« Why teams overpay some good (but not elite) players?