The Golden State Warriors assist on 70.9% of their field goals and they are leading the league with 47 wins. The All-Star Weekend is a good time to take a look at how each team has fared as the league prepares itself for the second half of the season. Below is a chart that shows each team’s assists, made field goals, assisted field goal percentage, wins & losses, and the winning percentage. 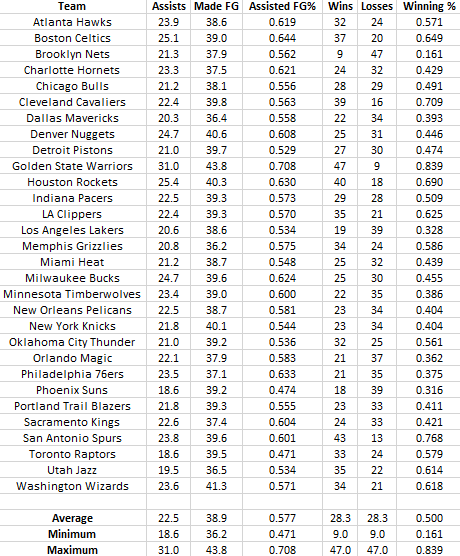 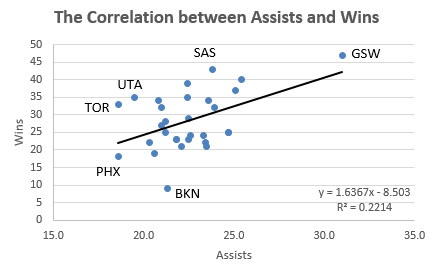 In the linear regression above, we see that with a slope of 1.6 and an R-Squared of 0.22, the result is a little ambiguous as the Warriors clearly lead the rest of the league in both assist and wins. The San Antonio Spurs are an outlier as they are sixth place in total assists but second in wins. This is a clear evidence of their incredibly efficient offense. Other outliers include the Utah Jazz and the Toronto Raptors. On the flip side, the Brooklyn Nets are the sole outlier situated at the bottom of the chart. 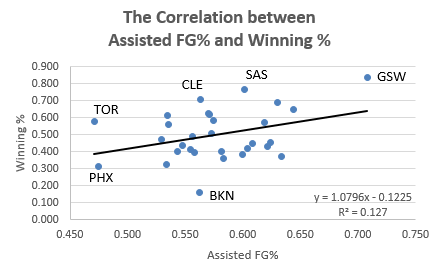 It is no doubt that high assist numbers or percentage can result in many wins, but average and lower-than-average numbers or percentage can ramify into various different win-loss records as the two are not strongly correlated. Assists and assists percentage alone are not good indicators of win-loss records because there are many other factors that can contribute to wins other than good movement. Teams such as the Raptors and the Cavaliers don’t have high assist numbers and assisted FG% but they are winning because of experience and a good mix of veterans. The Jazz have one of the lowest assists but are winning because of terrific defense to compensate for their shortcoming on assists.

(all tables and graphs are created by me, all stats are courtesy of NBA.com’s player tracking as of February 17, 2017)