The intangible stats for Game 1: Warriors vs Cavaliers

Below are some of the statistics I recorded for Game 1 of the NBA Finals. NBA’s SportVU does not keep track of these stats but I figure NBA teams internally keep track of those. One of the stats I am most interested in is the average time the team spent on their respective offense. Below is the breakdown. Note that these possessions are non-transition. I only record the average time the teams run their offenses when the opponent’s defense is established. In addition, the average time does not include the offensive possession when the shot clock is off (less than 24 seconds).

(Note: * = out of bound play; ** = second chance opportunity where the ball is brought back to the perimeter rather than an immediate putback; *** = shot clock is off: B = shot is blocked; late shot clock = when the team shoots the ball with 3 seconds or less on the shot clock; shot clock: the time that remains on the shot clock when a shot is attempted. Shot clock time is recorded when the ball releases from the player’s hand) 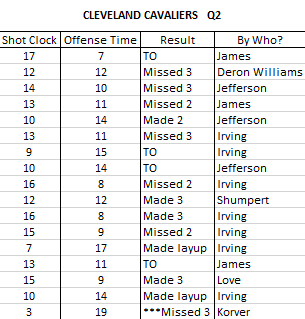 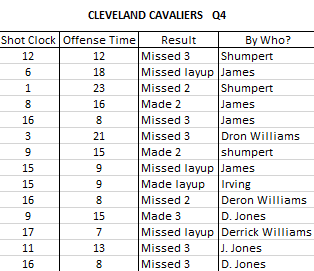 Overall, the Cleveland Cavaliers average 12.8 seconds on their offense (12.2  and 11.4 seconds respectively in the first and second quarters). They show sign of fatigue as the Warriors use their quickness to slow down the Cavaliers. The Cavaliers average 15.3 seconds on their offense — which is upped by almost 4 seconds. The Cavaliers were able to keep up with the Warriors’ speed and were down by only 8 points (52-60) heading into the halftime. But the Warriors pulled away in the third quarter. Coupled with limited production from the Cavaliers’ bench and exhausted starters, the Cavaliers were slow and tired (especially James and Irving, who are solely carrying the majority of the offense) and were trailing by 21 points (72-93) at the conclusion of the third quarter. 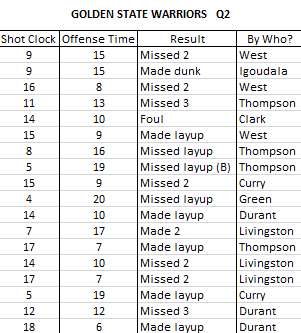 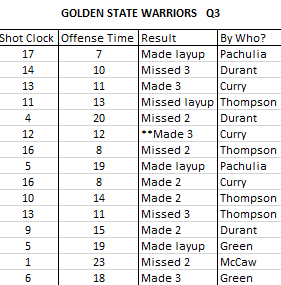 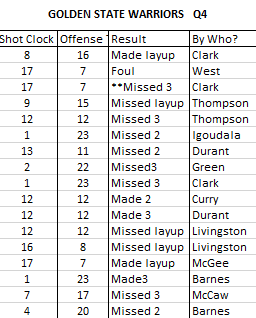 The Warriors, on the other hand, maintained a relatively consistent time as they ran their offense. Deep roster and depth helped to keep their starters fresh as they spend 13.5 seconds on their offense ( 2 seconds less than the Cavaliers’ ). Moreover, the Warriors played very fast and only had one offensive possession in which they used more than 21 seconds on the shot clock in the first three quarters combined. The Cavaliers had five offensive possessions by the end of the third quarter. The two second difference on the average offense time (in the third quarter only) and the number of late offense indicate the Cavaliers’ limited offensive production and stagnant pace — which are no match for the Warriors. To sum up, the game was obviously very fast paced as no team committed shot clock violation. The Warriors were able to maintain their speed and follow their offensive scheme by forcing the Cavaliers to play their game. The result is tiring out the Cavaliers core players and rendering their offense ineffective as manifested by their huge drop on time spent on offense in the third quarter — which proved to be the quarter that changed the game.

I always have an inclined fascinations towards the little things, so I figured to record the number of dunks in the game. Dunks are also a good indicator to show a team’s overall offensive fluidity and ball movement. The Cavaliers were trailing the Warriors from the start as the Warriors out-dunked the Cavaliers 6 dunks to 2. And the only two dunks in the first quarter were from LeBron James. Overall, the Cavaliers only dunked 4 times as opposed to the Warriors’ 11 times. Even Zaza Pachulia dunked once (he only dunked 10 times in 70 games this season and twice prior to the Finals) and that shows well the Warriors’ offense was in Game 1. The absurd amount of dunks by the Warriors (7 in the first quarter, the most dunks they had in any quarter this season), and Kevin Durant’s career-tying 6  dunks in a single game really show the Warriors’ supreme ball movement and dominant transition game. Interestingly, Shaq is the only player besides Durant to perform 6 dunks in an NBA Finals game as he did that back in Game 4 of the 2004 Finals against the Detroit Pistons. 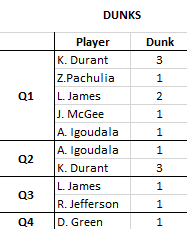 Rebounds are branched into offensive rebounds and defensive rebounds. Moreover, NBA’s player tracking also keeps track of advanced rebounds such as the percentage and the distance of the rebounds, etc. I think keeping track of free throw rebounds might be a cool thing to do and I assume teams also keep track of such forgettable rebound.

Both teams went 31-41 from the line (20-25 for the Cavaliers and 11-16 for the Warriors) and 5 of these 10 missed free throws came in the second attempt. Not so surprisingly, James collected all of the Cavaliers’ 3 free throw rebounds.

Last is the hustle stats. While the NBA keeps track of hustle stats (click here for hustle stats) such as deflections, loose ball recovered, shots contested, etc, I figured to add my own metrics to complete the hustle story. I believe these metrics tell whole story about a player’s defensive intangibles and efforts on the court.

(Note: put back is recorded when a player receives the offensive rebound and attempts to put back the ball within two dribbles or under three seconds; a tip in attempt, though not an offensive rebound, is also recognized as a form of put back)

Though the Cavaliers were active with the putback categories, this also suggest their inefficient offense and slower pace. The Cavaliers weren’t committed in getting back on transition defense because they are putting more effort on second chance opportunities — which yields many transition dunks in the first half before giving away the game in the third quarter. As suggested in my analysis, it is beneficial for the Cavaliers to have four players to run back to the other end to stop the Warriors’ transition (while leaving the slower Kevin Love for boxing out for offensive rebounds) than letting the Warriors run and getting into rhythm. Teams that also feature two bigs such as the San Antonio Spurs and the Los Angeles Clippers also employ the same tactic when countering the opponent’s transition.

One notable difference is the charges. The Cavaliers’ defense looked unorganized and it is easy to see why as they didn’t even attempt to draw charges. The Warriors drew charges and Stephen Curry alone had two — with one coming from LeBron James.

I had a lot of fun uncovering these unheralded statistics and I will continue to record these for the rest of the NBA Finals series. It should be interesting to see how these intangibles develop as the series progresses. (Click here for Finals analysis and Game 2 report.)

(all tables are created by me, and all sources of stats are courtesy of NBA.com and SportVU player tracking as of June 1, 2017)